Most professional Christian magicians have, at one time or another, been confronted by a well-meaning but uninformed audience member claiming that the magic they just saw on stage had to have been accomplished with demonic assistance. Or as some disparagingly call it, “demon magic.”  The “miracles” witnessed are so inexplicable they must be supernatural in nature.  There could not possibly be any other explanation.

To be sure, the vast majority of Christians know that, as impossible as some magical effects appear, there has to be a natural explanation and that demons were not the magician’s unseen assistants.  But some don’t and go to great lengths to prove to the world that magicians – even Christian magicians — employ the powers of darkness. 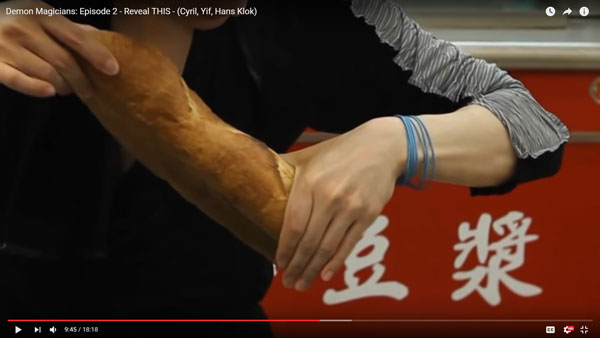 Such was the case in 2014 when a series of popular YouTube videos dubbed “Demon Magicians” emerged featuring clips of various magicians, most of them well-known, in an attempt to “prove” that many magicians tap demonic powers to accomplish their magical, mysterious feats. What proof is cited? The author of the series of videos points to the impossibility of the effects and the sinister persona of the magicians. To be sure, some of the magicians in the videos do sport ominous and sometimes downright creepy guises to enhance the mystery experience. After all, they are on stage playing a part.

As for the impossibility of the effects cited as proof positive of demonic aid, I can assure you they are merely magic tricks. Really good tricks—but tricks nonetheless. The secrets are much more mundane than marshalling the demonic forces of darkness; some, such as a levitation cited on one of the videos, use methods that have been commonly employed by stage magicians for well over a century.

Sadly, tens of millions of views and thousands of comments to this video series indicate that many viewers have accepted the false notion that Satan’s powers are far greater than the powers God bestowed on him.  And sadly the series has advanced the stereotype in the minds of non-Christians, who see the folly of the author’s claims, that Christians are backward-thinking pinheads lacking any reasoning ability.

In our book Unmasking the Masquerade we attempt to bring a biblical, rational balance to the discussion of the limits of Satan’s powers.  Although he is unquestionably the enemy of our souls, Scripture is clear that he does not possess miraculous powers that God reserves for Himself.   Nor do his demonic minions.  We also make the case that the more power unwitting Christians assign to Satan, the more unnecessarily fearful they will be of him.  In such cases our enemy scores another defeat.  On the other hand, when we understand that Satan is not to be feared and that his powers are greatly limited by our Creator, we are liberated to reverence alone the God who loves us.